Quick notes about the night:

Sabriel was a snuggly little ladybug, and pretty much rolled with the punches, including a hood that was obscuring her vision. She just rolled along in the stroller, and then went home with daddy at 6:45 and went straight to sleep. :)


Atticus went as Diego.
He couldn't have cared less.
He loved getting candy and immediately eating it as we were walking to the next house.
After a while, I gave him tootsie rolls because I knew they would take longer to eat.
He also liked saying "Twick or Tweat."
Except he would say it, over and over, Rain Man style, up the driveway, up the sidewalk, up the stairs, and sometimes kind of grouchy if people weren't fast enough with the goods.
He was super friendly to everyone and even walked into a house (thank the Lordy that we were, you know, not trick or treating at a kidnapper's house). The house was with a family all dressed up in various costumes, including the dad wearing a "scary wizard" costume. Atticus was not fazed a bit. Hehe


Emerson was the prettiest fairy tale princess that I saw.
I might be a bit biased.
She wore her "glass slippers" nearly the whole time without complaint, and trooped up steps with them time after time.
She had a great time and felt like a true princess.

We had a wonderful time and I think we are starting to get our bearings here in our town. By next year, we should have a really good strategy for getting candy.

That was the one thing that was kind of lame last night- our spoils of war were very skimpy. Not every house was giving out candy, and we did a LOT of walking for a small amount of candy. We should've hit up the garden home community first- flat roads, close together houses, and no steps to climb.

I am taking down Halloween stuff today and putting up Thanksgiving decor. I'm thinking I may trick Shaun into getting me some more pumpkins so I can do some of these. I'm going to do them with just candles, though... don't want to bother with all the cords and such. I think they'd look pretty on my mantle. 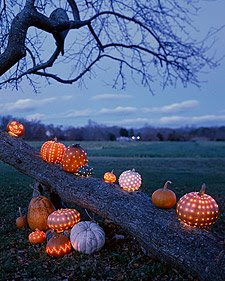 Hope you have a great weekend, friends!
at 8:53 AM documented by Virginia
Email ThisBlogThis!Share to TwitterShare to FacebookShare to Pinterest
Labels: family, pictures