How to Have a Frugal (aka Cheap!) and Creative Pirate Party

Our pirate party was a great success! I think the kids all had fun, and I can easily see us having a pirate themed party later on as the kids grow older.

Below are all the ideas that we used. I tried to keep it simple but also entertaining, as we had around thirteen preschoolers!

I made this in photoshop and printed it two to a piece of white cardstock. I inked the edges with brown ink, rolled them up, and tied them with a piece of hemp for delivery. 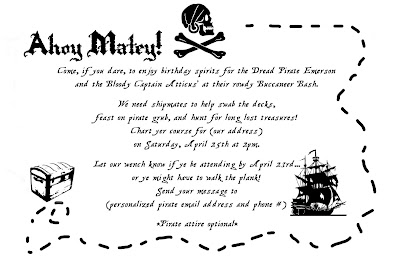 I planned for the party to take place all outdoors, with the exception of the cake & the presents being opened, which we would do on our screened in front porch. I tried to make use of whatever I already had on hand, could borrow, or make easily.

I made several signs for our yard with cardboard, brown paint around the edges, and black painted lettering. This was the sign for our porch door, along with a skeleton from my Halloween decorations. 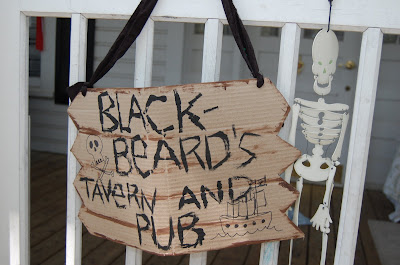 This silly guy was borrowed and made more piratey with a bandana. 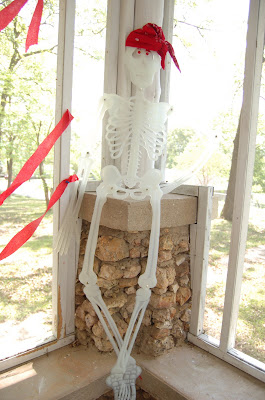 One view of the party end of the porch. Everything I could think of was made to look more ragged (like cutting the edges of the tablecloth). 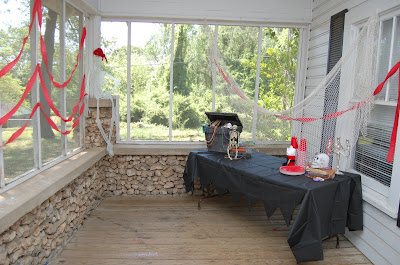 I hung an old net that I borrowed from my Grams behind the table and added pops of red with the streamers. 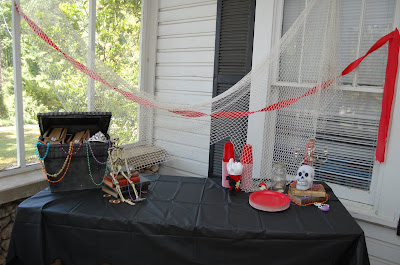 Books, candles, mason jars, a candleabra, a borrowed Halloween skull, and jewelry from Em's dress up box made the decorations on this end. 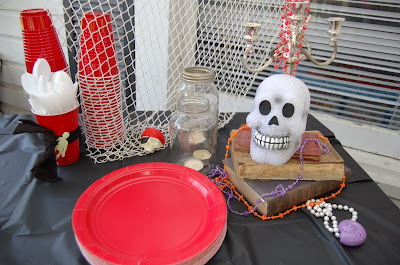 A spray painted cooler ($1.88 at Walmart), more of Em's dress up jewels, books, another borrowed Halloween skeleton, and spray painted poker chips made up the decor on this end. 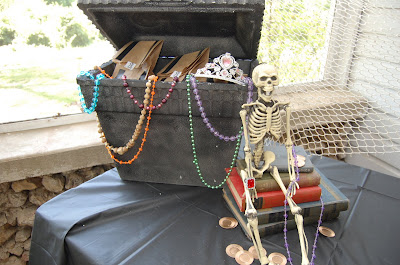 I set up "stations" around the yard, going back to my days of preschool teaching & VBS's. The stations were a mixture of imaginative play, crafts, and planned games.

When the guests arrived, we took them to the Jolly Roger Tattoo Parlour. 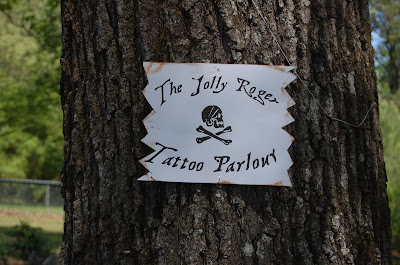 I made the sign in Word, and using fonts I downloaded. Printed it on cardstock and then cut the edges zig-zag... the final touch was adding brown ink around the sides. 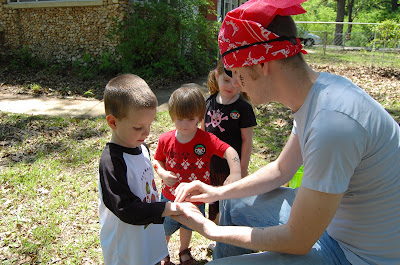 Here, little pirates could choose a tattoo (we got some similar to these), get a scar drawn on (using a black eyeliner pencil), and pick out a black sash (they got to take these home, too). I had glitter hair spray on hand for the girls. They could also dress up with some other items that I had on hand, such as bandanas. I had the mirror from my bathroom set up so they could check themselves out. The sheets were hanging on a string I had strung up between two trees. 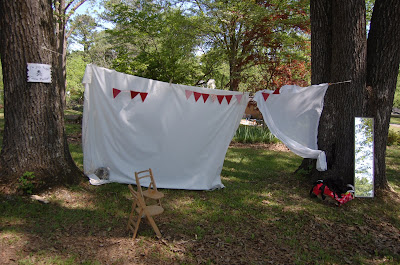 After they got all piratey looking, they could go play on our "pirate ship" (our playset has a telescope on it and ropes, so I figured it was an easy route to go for a ship!). I added the Jolly Roger flag. 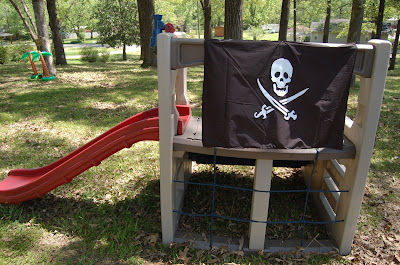 I ended up making our flag because I couldn't buy one locally and I didn't think to order one online until only a few days out from the party. (Great planning, huh?)

I saved this coloring sheet and printed it out (after enlarging it a bit in photoshop). I cut out the pieces, pinned them to white felt, and then cut them out again. Then I glued them with Aleene's Tacky Glue onto my black fabric. All my black fabric that I used for the party (including the black pirate sashes all the kids got) came from a $4 flat sheet from Walmart. 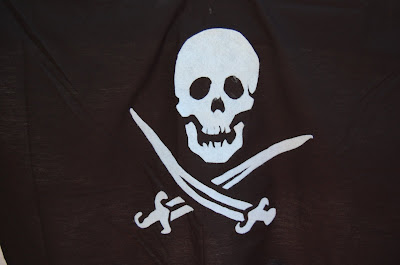 Once all the kids were ready, I called the pirates over to our "Treasure Island" station. 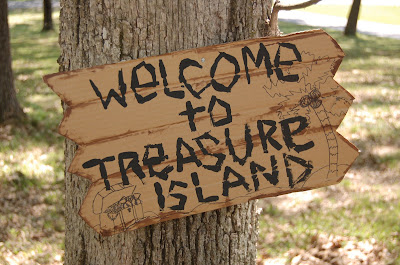 (The sign was made from cardboard and brown & black paint; the palm trees are $2.50 each at the Target Spot; the skull is one of my Halloween decorations.) 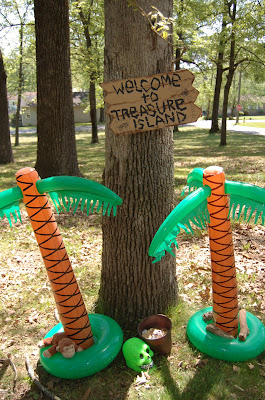 The way we did our treasure hunt was a little different, since I knew the little kids could probably not follow a map or clues. I spray painted poker chips with gold paint (cheaper than buying them and I had the poker chips on hand) and bought a big bag of rings from Party City for a couple of bucks. We spread the coins and rings in piles around the yard before the party. When it was time for the kids to go treasure hunting, they were instructed to go find whatever treasure they could and run back up and dump it in our community bucket, where we would later split up the loot (so that everyone got equal amounts of treasure). It went really smoothly and the kids had fun running around the yard looking for the treasure. Afterwards, I had the kids sit on a blanket at the next station and we handed out 5 gold doubloons and 1 ring to each kid. 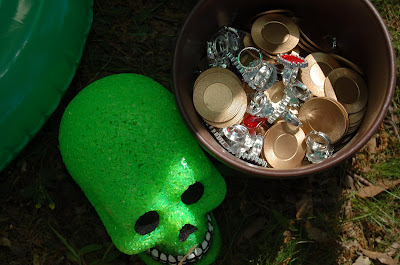 The kids chilled out on a quilt I laid out for them, while they waited their turn to play Pin the Patch on the Pirate. 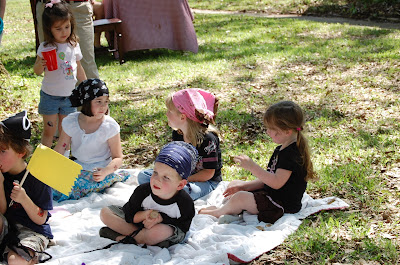 I drew this pirate on a piece of posterboard and my sister colored him in for me. The kids thought he was really cool (although my sis and I kept laughing that he looked kind of freaked out). 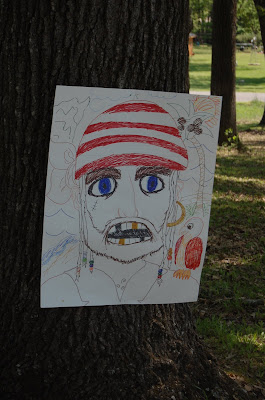 Each kid got blindfolded, spun around, and had a go at taping the patch over one of the pirate's eyes. (Yes, that's me and my big preggo belly.) 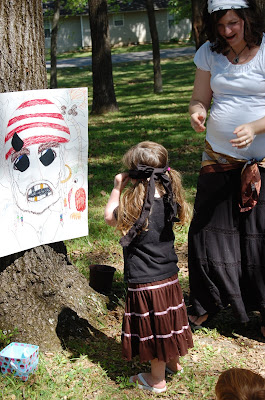 After each kid had their turn, they got to pick out a pirate patch to keep. I made these from felt (5 pieces of felt for $1 at Hobby Lobby made 30 patches), punched a hole in each side with my Crop A Dile, threaded strips of black fabric (from my black sheet I made the flag & sashes from), and then glued on foam skulls (another find from the kids' craft section at Hobby Lobby, around $2). 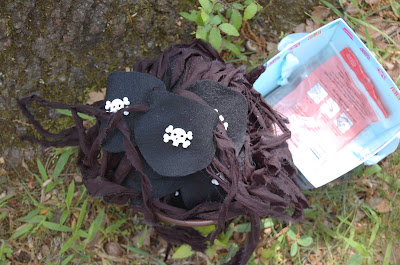 The next game was out on our driveway, and we didn't get any pics of it. We played Musical Islands, which was a simple game suggested by my friend Jana. My sister drew 20 numbered "islands" (circles with palm trees) with chalk. We played pirate music (I downloaded a few songs from this cd on iTunes- it had the best pirate music on it- mostly instrumental and very fun background music!) and then stopped it every couple of minutes. We then called a number and whoever was on that number got to hop off and get a balloon sword made by the Hubs. (Balloon swords were less likely to poke someone and definitely cheaper!) 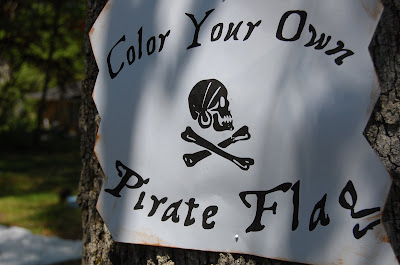 During any transition time, the kids were welcome to make their own pirate flag at a table we had set up with the supplies. The pack of foam rectangles was around $4 for 50 sheets at Walmart, and a small pack of 8 dowel rods was .96 there too. I just punched holes in each end and threaded the dowel rod through. Washable markers were available for them to use to color on them. 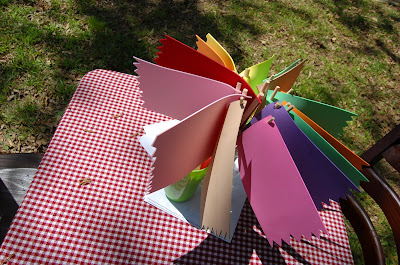 The Food:
I kept the food really, really simple because I knew I was going to be running around doing the games with the kids, and I needed stuff that I could just set out. We had goldfish crackers, grapes, strawberries, cake, and ice cream.

I also got an idea for "Shark's Blood Punch" that some of the kids loved (and some were nervous to drink after I told them it was Shark's Blood!). All you did was make ice cubes out of red Kool-Aid and drop a couple in a cup of 7-Up or Sprite. It was VERY yummy and turned the drink red!

I made this Pirate Ship Cake , and after making it realized I might need another cake. 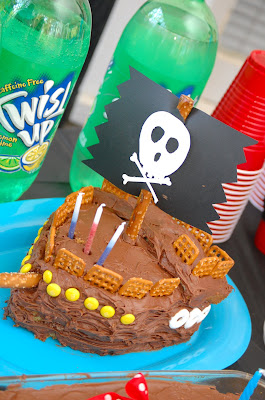 The morning of the party I made this sheet cake, and then my sister expertly did the girly skull on top of it about 5 minutes before the party. 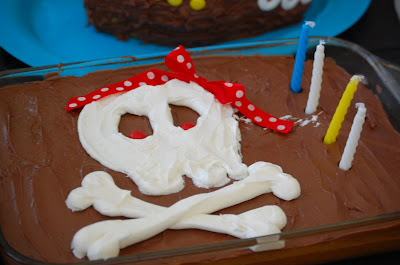 The Loot Bags:
In addition to each kid getting their tattoos, sash, eye patch, flag, and balloon sword during the activities, they got a little loot bag of candy. I wanted to do little treasure chests, but just the boxes alone were going to run me around $25. I found this idea and loved the easiness of it! They are just brown paper bags, electrical tape, and clip-art locks printed on labels. 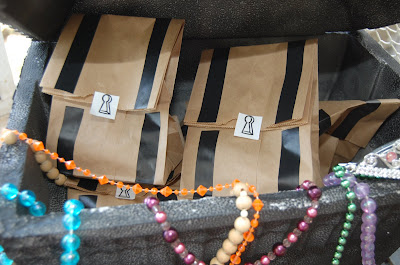 If you are planning a pirate party, I HIGHLY recommend this site: Coolest Kid Birthday Parties. They have ideas on there for lots of other themed parties. My favorite thing is that they have a reader idea gallery; I found lots of great pictures and ideas in there.

Many, many, many thanks go to my sister, who tirelessly helped me with all the details of the party; my aunt, who delivered cake mixes, frosting, pretzels, skeletons, and much more to me when I needed it; my brother, who put on a bandana, drew a scar on his face, and happily drew tattoos on little kids; and the Hubs, who put up with all my crazy ideas and made tons of balloon swords for hoards of preschoolers. :)
at 3:26 PM documented by Virginia
Email ThisBlogThis!Share to TwitterShare to FacebookShare to Pinterest
Labels: craft ideas, family, video