Pinterest Recipe- I did it! Pumpkin Pancakes with Cinnamon Syrup 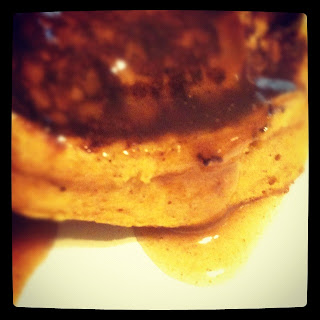 I saw this recipe on Pinterest who knows how long ago, and tried it out several times... it is such a winner in our household, that I wanted to share it with you guys.

(Occasionally you will stumble across a dud of a recipe on Pinterest, but you don't know until you've cooked it and wasted all that time... and who wants that?! Not me!)

The recipe I pinned was from here, and this is her adaptation:

Heat a lightly oiled griddle or frying pan over medium high heat. Pour or scoop the batter onto the griddle, using approximately 1/4 cup for each pancake. Brown on both sides and serve hot.
Cinnamon Syrup:
1/2 cup white sugar
1/2 cup packed brown sugar
2 Tablespoons all purpose flour
1tsp ground cinnamon
1 tsp. vanilla extract
1 cup water
Stir all ingredients together in a small saucepan. Over medium heat, stir occasionally until boiling. Let it boil for a few minutes while stirring until it thickens. Remove from heat and set aside until needed.


My only advice is DOUBLE the recipe! At least! Because this only yields 6 large pancakes or 12 small ones, and that will certainly not be enough. I promise!

Hope you enjoy this fall treat as much as we do!

at 7:00 AM documented by Virginia
Email ThisBlogThis!Share to TwitterShare to FacebookShare to Pinterest
Labels: family, Menu Planning