The Return of the King, “The Grey Havens,” by J.R.R. Tolkien

It was evening, and the stars were glimmering in the eastern sky as they passed the ruined oak and turned and went on down the hill between the hazel-thickets. Sam was silent, deep in his memories. Presently he became aware that Frodo was singing softly to himself, singing the old walking-song, but the words were not quite the same…

Still round the corner there may wait
A new road or a secret gate;
And though I oft have passed them by,
A day will come at last when I
Shall take the hidden paths that run
West of the Moon, East of the Sun.

…”Yes, I am coming, said Frodo. “The Ring-bearers should go together.”

“Where are you going, Master?” cried Sam, though at last he understood what was happening.

“No, Sam. Not yet anyway, not further than the Havens. Though you too were a Ring-bearer, if only for a little while. Your time may come. Do not be too sad, Sam. You cannot be always torn in two. You will have to be one and whole, for many years. You have so much to enjoy and to be, and to do.”

“But,” said Sam, and tears started in his eyes, “I thought you were going to enjoy the Shire, too, for years and years, after all you have done.”

“So I thought too, once. But I have been too deeply hurt, Sam. I tried to save the Shire, and it has been saved, but not for me. It must often be so, Sam, when things are in danger: some one has to give them up, lose them, so that others may keep them….[you] keep alive the memory of the age that is gone, so that people will remember…And that will keep you as busy and as happy as anyone can be, as long as your part of the Story goes on.”

But Sam was now sorrowful at heart, and it seemed to him that if the parting would be bitter, more grievous still would be the long road home alone. But even as they stood there, and the Elves were going aboard, and all was being made ready to depart, up rode Merry and Pippin in great haste.

“Yes,” said Gandalf, “for it will be better to ride back three together than one alone. Well, here at last, dear friends, on the shores on the Sea comes the end of our fellowship in Middle-earth. Go in peace! I will not say: do not weep; for not all tears are an evil.”

And the ship went out into the High Sea and passed on into the West, until at last on a night of rain Frodo smelled a sweet fragrance on the air and heard the sound of singing that came over the water…and he beheld white shores and beyond them a far green country under a swift sunrise. 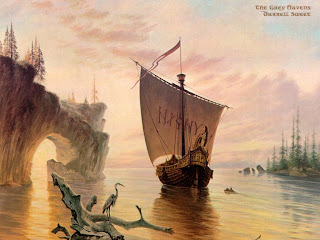 But to Sam the evening deepened to darkness as he stood at the Haven; and as he looked at the grey sea he saw only a shadow on the waters that was soon lost in the West. There he stood far into the night, hearing only the sigh and murmur of the waves on the shores of Middle-earth, and the sound of them sank deep into his heart.

At last the three companions turned away… they rode slowly homewards; and they spoke no word to one another until they came back to the Shire, but each had great comfort in his friends on the long grey road.

at 8:56 PM documented by Virginia
Email ThisBlogThis!Share to TwitterShare to FacebookShare to Pinterest