My children are all really afraid of animals. I'm not really sure why. But it doesn't matter how big or tiny, they kind of freak out. We don't have a pet so unfortunately our exposure to other animals is not as frequent as I would like.

A few years ago, however, we met Murray (the big orange fella in the pic below). He's one of the Russell family that I mentioned in the post below. Since we are in a community group with them at our church, we have been over to their home a lot over the last few years, and my kids have- for the most part- become comfortable around him. Especially Atticus.

He became really fascinated with him a few years ago, even getting a couple of stuffed animal cats that he named after the dude. He would tell me about them having all sorts of adventures, including them riding bikes together. (You can see a layout from 2009 here about them.) 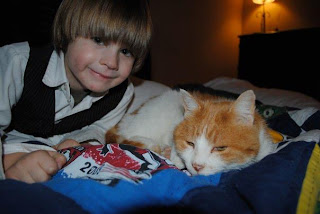 Usually, Shaun puts Atticus to bed while I get the girls snuggled down, but on the rare occasion, I will put Atticus to bed. Instead of reading him a story like Daddy does, I will make up a story about him and Murray. I quite often picture a little Calvin and Hobbes duo in my imagination as I come up with the tales.

A few recent stories include:

-Murray & Atticus going trick or treating and getting lots of candy

-Murray and Atticus sneaking to the North Pole & hearing Santa talk about the nice & naughty list... Santa happened to mention that no one can be good all the time, and that's why we celebrate Christmas: for the gift of redemption God provided us in His gift of Jesus. And then Murray happened to also spot some gifts wrapped up for Atticus. ;)

-Murray traveling back in time on the TARDIS with the Doctor to get a glimpse of baby Jesus in the manger, with all the animals around. Murray got to chat it up with a sheep and a cow.

I love this little special tradition we have.
I'm hoping on making him a little book of the Murray stories. :)

at 8:00 AM documented by Virginia
Email ThisBlogThis!Share to TwitterShare to FacebookShare to Pinterest