I had a small miracle this morning.

In my eyes, it was actually quite a large miracle.

Last night, I went to the midnight movie premiere of Twilight.

I met up with some friends beforehand, where Whitney (of Pikl Paper) and I handed out our "We Brought a Snack" boxes. 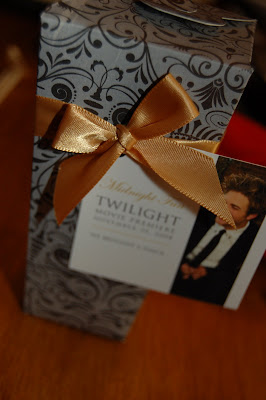 Then we headed off to the theater, coated in glitter spray and giddy with excitement. 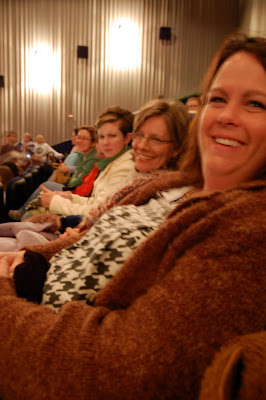 Michelle and I sat and played our own version of "theater bingo" (including squares with things to spot such as "Someone wearing a handmade Twilight shirt" and "a dude walking in") while we waited for the movie to start.

We suffered through the freaky freaky freaky nightmare inducing preview for "the Unborn", the deliciously exciting preview for Harry Potter and the Half Blood Prince, and some crappy Tom Cruise movie preview. (Sorry, the movie itself might be fine and dandy, but my perception of Tom has been forever altered.)

It's darkly beautiful, full of teenager angst, seriously cheesy at moments, smokin' hot at others. Some times I found myself laughing hard (and I'm not sure if the movie's directors intended it to be funny), and other times I found myself entirely entranced by the beauty of the Cullens. And James. Don't forget him.

The movie version of any book, especially one I love so much, could never ever ever live up to what the author originally intended or what I imagined in my head. The only one that has ever come slightly close to my expectations have been the Harry Potter movies, and I think that's largely in part due to the fact that JK Rowling had almost entire creative control over what was filmed and projected in the movies.

There are plenty of things that I could point out that disappointed, like when Edward is playing the piano and it smacks of an 80's music video with the fog and lighting. Or the amount of makeup poor Carlilse is forced to wear. However, I know that there will be plenty of people on the internets this morning that will do that job for me.

I for one, will continue to bask in the glow of a fun movie, and then go back and curl up with my favorite version of the story... the original book form.

It was a highly entertaining experience, made all the more fun to go with other Twilight lovers. :)

Oh, and the miracle I mentioned earlier?

My kids slept until 10 freaking o'clock this morning. (Atticus actually woke up at 7, watched cartoons for a bit and then crawled into bed to snuggle with me and fell back asleep.)

I honestly think I got more sleep last night than I get on a regular basis.
at 10:58 AM documented by Virginia
Email ThisBlogThis!Share to TwitterShare to FacebookShare to Pinterest